Two Australians – four times Dakar Rally competitor Christophe Barriere-Varju and fashion model, actress and television presenter Laura Csortan – are set to feature in a documentary tracing the route that was once a part of the world’s most gruelling race, the Paris-Dakar Rally.

The National Geographic Channel has produced “Riding Morocco: Chasing the Dakar” that will air in over 170 countries and regions around the world in the coming weeks.

The documentary follows the pair as they ride from Marrakech in Morocco through mountains, gorges, rivers and deserts to reach the Moroccan Sahara.

The route is no longer used for competition since the rally was moved to South America and renamed as the Dakar Rally.

Christophe shares his vast knowledge and demonstrates some serious off-road riding skills on the manual bike, while Laura, who had never ridden off road before this project, does the trip on the Dual Clutch Transmission model. 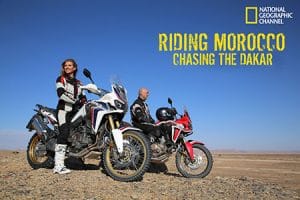 Together they take the viewer through breathtakingly beautiful valleys and expansive vistas as they share the bike ride of a lifetime.

Christophe was born in France, raised on the Ivory Coast of West Africa, studied in the United States and now proudly calls Australia home.

He is no stranger to epic adventures and has competed in the Dakar Rally four times.

The internationally acclaimed and multi-award winning film “Dream Racer” follows his progress through one of those events.

Laura was crowned Miss World Australia and Miss Universe Australia 1997, represented Australia and was a host on “The Great Outdoors” and “Wheel Of Fortune” on the Seven Network.

“Riding Morocco: Chasing the Dakar” will air in Australia and New Zealand on June 17th at 10:30 PM and more information on the show is available on the National Geographic website.