Benelli’s General Manager, Haimei Yan, has given an insight into the future of the historic Italian brand and its plans to produce a much wider range of bikes.

The company has been under the control of the Chinese Qianjiang group for close to 11 years, which realistically has saved the brand from extinction.

While Qianjiang has been focussed on stabilising the company and building mainly smaller capacity bikes, Haimei Yan says that at the end of the year the company will show a far more complete range of bikes from 125cc to 750cc.

“We have really big plans for Benelli in 2017 to expand our range to appeal to European tastes,” confirmed the General Manager.

Australia currently has a range of Benelli models available that use the 300cc twin, 600cc inline four, 899cc and 1131 triple cylinder engines.

While Benelli is not currently seen as a major brand in either Australia or Europe, Qianjiang has the resources to turn that around.

Qianjiang is one of the biggest motorcycle builders in China, producing over one million bikes a year. 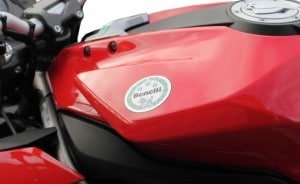 Only about 50,000 of those are Benelli branded, and the group has several other brands for its domestic market that could easily be rebranded as Benelli.

And unlike many manufacturers, Qianjiang has all the resources and currently builds both scooters and motorcycles.

Yan pointed out that “only really Honda and Yamaha have a similar range and we are the only Chinese manufacturer who builds this variety of bikes.”

“All the new motorcycle technology is coming from Europe, especially Italy.”

“We do all the research, design and development in Italy and the Chinese manufacture the product, although the three cylinder Benellis will still be built in Italy.”

But a Benelli sports bike isn’t likely in the near future. Yan feels the sports bike market is declining and too small for Benelli to focus on just yet.