Today’s Stage 10 of the 2017 Dakar has proven to be a tough one for many of the top competitors, but Australian Todd Smith has managed to make it through.

Todd has finished a gruelling day in 34th place, 1hr18m53s behind the leaders in a day that has been filled with drama.

Ricky Brabec (Honda) and Pablo Quintanilla (Husqvarna), who was second overall going into today’s stage, have both dropped out of the 2017 Dakar.

And Stefan Svitko (KTM) has collapsed after only several kilometres of the link stage and has been taken by ambulance to hospital in San Juan. He had finished the stage in second place.

Pablo Quintanilla stopped 400 km into the special after suffering a dizzy spell and was evacuated under the care of the medical team.

He’d had a rough day losing plenty of time with navigational issues and a problem with the bike that took time to fix.

Ricky Brabec’s Honda failed him just 12 km from the finish, a disappointing blow to the American rider.

A long “trials” like section at the beginning of the stage and difficult navigation has turned the leaderboard on its head. 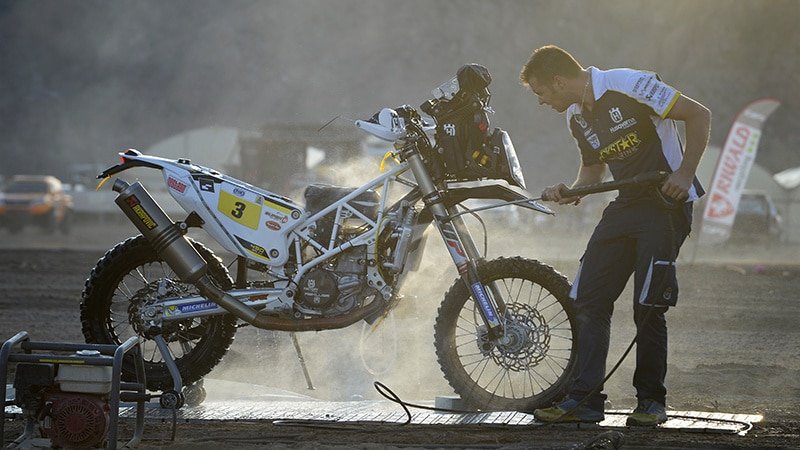 Yamaha’s Adrien Van Beveren finished today’s stage 30 minutes off the pace in 17th and that has dropped him off the podium to fourth place overall.

As of 8am AEDT only 50 of the 109 riders that started today have managed to complete the 751km stage from Chilecito to San Juan in Argentina, and final placings are still to be confirmed.

The stage win goes to Joan Barreda, second place to Stefan Svitko and Argentina’s Franco Caimi has taken third today on his Honda.

Provisionally, Sam Sunderland will hold on to his overall lead, KTM teammate Matthias Walkner is sitting second and Gerard Farres Guell, who has been running in the top 5, moves up to third overall.

Those placings are still to be confirmed.

Australian Matthew Hart and Italian Manual Lucchese are still to complete the stage. We will have an update on their progress later today.