Australian Todd Smith has finished the 2017 Dakar in 18th place, fellow Aussie Matthew Hart 44th in his first ever attempt, and British rider Sam Sunderland has claimed his first win.

Today’s 751km stage contained a 64km special without the navigational tricks and pitfalls of previous stages, and then a long link stage to the finish line in Buenos Aires.

Todd covered the timed special in 40m5s and that was enough to secure him a top 20 finish. 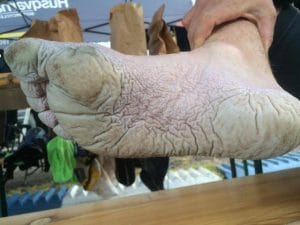 Fellow Australian Matthew Hart on a Husqvarna actually completed the special in a faster time than Smith, moving him up to 44th in the overall standings.

Matt’s partner Kate posted to Facebook not long before he started the final stage, including some photos showing how Matt’s feet were holding up after 12 days of riding!

Sam Sunderland came into the final stage with a 33m9s lead over KTM teammate Matthias Walkner, and all the Brit had to do was complete the stage without any dramas to take his first win.

From there all he had to do was complete the long link stage to secure the win.

It is the first time he has finished the Dakar, having attempted it in both 2012 and 2014 without success.

“Unbelievable. When I crossed the line I felt all the emotion hit me. The weight on my shoulders of the race over the last week, leading the rally has been really heavy”, Sam said at the end of the rally.

“It’s the first Dakar I’ve ever finished and to finish first is an incredible feeling. I’m really lost for words.”

For Honda it must be a case of “what could have been”. The 1 hour penalty handed to the Honda riders for a refuelling infringement in stage 4 cost them the win – without it Barreda would have won the event by nearly 17 minutes!

Italian rider Manuel Lucchese, who we spoke to about his preparations for the event and have been following, has been competing without assistance of a support crew and managed a very successful 51st. He was just 27 seconds off a top 50 finish.

SBS wraps up its coverage of the Dakar today from 5.30pm to 6.00pm (check your local TV guides to confirm).

And if you want to see the Dakar in its purest form, check out the multi-award winning feature film Dream Racer.

The movie tracks 4 times entrant Christophe Barriere-Varju’s progress through the event and is one of the most inspiring film you will ever watch.

You can also win a personally autographed copy of Dream Racer in our competition.