The life story of motorcycle legend Barry Sheene is to be depicted in a movie.

Development of the film based on the book “Barry: The Story of Motorcycling Legend Barry Sheene” is said to be well underway in a press release from the producers.

Barry has been described as the most charismatic and influential motorcycle champion of all time.

His charming but rebellious nature endeared him to people all over the world, and he is widely credited with transforming Grand Prix motorcycle racing into a global phenomenon.

He fought with authorities and brought about many improvements in the safety of motorcycle racing and innovations in rider safety equipment.

He had two near-fatal crashes during his racing career, but his crash at Daytona in 1975 remains one of the most famous crashes in motorcycle racing history. 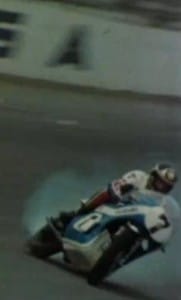 Sheene crashed his Suzuki RG500 at 290km/h in a private test in preparation for the Daytona 200. Whether the crash was caused by a tyre failure or engine issue is still hotly debated.

Images of the crash are still widely distributed across the internet 40 years later.

But it wasn’t just the severity of the crash and his injuries that made the crash so memorable, but his remarkable recovery.

Rumour is too that there’s footage of Barry flirting with nurses, and even trying to pinch the butt of one, while laying in the hospital emergency room.

Barry retired from racing in 1984, and moved to Australia a few years later with his wife Stephanie and two children in the hope that the warmer climate would help relieve some of the pain of his injury induced arthritis.

Once in Australia he set himself up as a property developer and found his way into TV.

He endeared himself to Australians as a motorsport commentator and as Dick Johnson’s side kick in a series of very popular and funny TV ads for Shell in the 90’s.

Barry Sheene died on the Gold Coast in 2003 after an eight month battle with cancer.

The film is being jointly produced by Will Stoppard from Deep Springs Pictures in the UK, and Rod Morris of IO Films in Australia.

The production team have released a teaser video, and more news is being added regularly to the Sheene film website and on the their Facebook and Twitter channels.