Ducati has unveiled its most technically advanced Panigale yet – the 1299 Panigale S Anniversario.

Ducati says the bike is the pinnacle of road-going superbike development and has been built to celebrate the company’s 90th anniversary.

It will be built in strictly limited numbers with only 500 available worldwide, and will cost an estimated AUD $43,000 based on leaked European prices.

While the bike is based on the current 1299 Panigale S, a host of technical and electronic upgrades put its specification level between the top of the range road going Panigale and the Panigale R, and as close as possible to the factory World Superbike.

The engine is basically unchanged and good for 205 bhp (151 kW), but Ducati have fitted it with uprated EVO versions of the Ducati Traction Control (DTC) and Ducati Wheelie Control (DWC) systems. 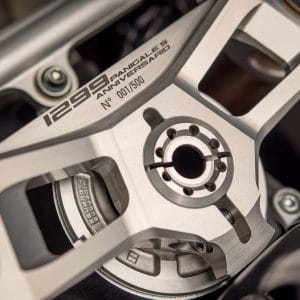 The electronic control systems will allow riders to drift the bike under power and use the throttle to steer the bike while still preventing the bike from crashing.

Ducati says the new electronics is the most advanced currently available for a road going bike.

The front end geometry can also be adjusted with a steering head insert, bringing the front wheel forward 5mm to match the geometry of the Panigale R.

Weight has been reduced by 2.5kg by using a special lightweight lithium battery, carbon-fibre heelguards, hugger, and a different rear shock unit.

The new black, white and red colour scheme has clearly been inspired by the MotoGP bikes, and gold-painted wheels with a hint of gold in the Akrapovic exhaust visually set the bike apart from anything else in the range.

Also spotted at World Ducati Week is what we believe to be the new 939 Supersport S.

The bike is very much a project at the moment but rumours are that it will be shown at Milan in November and available from the middle of 2017.

It is expected to be more road focussed than the Panigale range and a step down in performance from the 959, but still have three rider modes, 8-level traction control, and fully adjustable suspension.