Harley-Davidson has officially unveiled its new Milwaukee-Eight engine and announced updates to several motorcycles in its range.

The new engine is the ninth in the lineage of the company’s iconic Big Twin engines, and as we reported a couple of weeks ago it will at first be used in the touring range of bikes.

The all new design delivers more power and an improved motorcycling experience for riders and passengers with quicker throttle response, more passing power, a purer sound, and smoother ride while still retaining the iconic look, sound and feel of its predecessors. 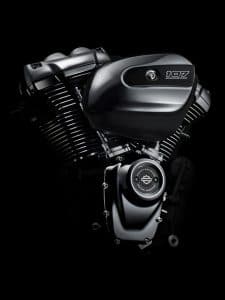 Milwaukee-Eight engines will power every 2017 Harley-Davidson touring bike and will be offered in two displacements and three variations:

In addition to an increased capacity, the Milwaukee-Eight engine also has a higher compression ratio and four-valve cylinder heads with 50% more intake and exhaust flow capacity.

The engine has a single chain-driven camshaft and the valve train requires no adjustment as the design of the rocker arms enables valve lash to be set at the factory for life.

Each cylinder has dual spark plugs that has helped to improve combustion efficiency.

The new engine has sleek, modern styling and with its new, slimmer primary drive cover and low-profile shape of the air cleaner cover, it provides improved rider legroom around the engine and an easier reach to the ground for many riders.

Other updates announced include new front and rear suspension components to enhance the comfort, control and performance of all 2017 Harley-Davidson Touring model motorcycles.

The front suspension has new Showa SDBV suspension technology that delivers the damping performance of a racing-style cartridge fork with linear damping characteristics and reduced weight.

The 2017 CVO Limited has new wheels, a reshaped seat for rider comfort and a new custom paint scheme.

For 2017 the CVO Street Glide has a four-speaker, 600-watt audio system and power locks for the saddlebags and fork controlled by a single security and locking key fob.

The 2017 Harley-Davidson Street 500 motorcycle is now available with ABS Smart Security System with hands-free, proximity-based security fob, each as a factory-installed option.