Production was halted because of damage caused to the facility by two earthquakes in the region in April. The second, a magnitude 7.3 earthquake, caused significant damage to the buildings and infrastructure.

Many component suppliers and supporting businesses were also affected. 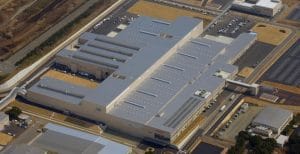 Honda has now completed the removal of debris and its damage assessment of the most affected areas including the assembly plant.

Initially it was hoped production could resume on April 28, but the damage to the plant was worse than first thought.

The Kumamoto factory turns out around 250,000 bikes per year and produces many of Honda’s large capacity bikes including Goldwing, the CBR1000RR, VFR1200F and the Africa Twin.

All of the off-road competition bikes are built there too.

While production has initially resumed on a small-scale it will be increased in stages according to the facility’s conditions, and Honda aims to have the plant back to full production in mid-August.

Dealers around the world have been warned that, depending on demand, there may be supply shortages for some models later this year.

In its media release Honda says it is fully committed to continue its efforts towards a rapid recovery, and is grateful for its customers’ understanding.