KTM is about to release the updated RC390 into Europe and Asia.

The updates are based on feedback from riders, as well as those required to make the bike Euro4 emissions compliant.

The most obvious change externally is the new exhaust system.

The exhaust now extends out to the right side of the bike rather than exit just under the belly pan.

That has enabled KTM to trim down the width of the belly pan and give the bike a little more ground clearance. It also forced a change in the pillion foot pegs.

The engine now has a ride-by-wire throttle that KTM claims makes the bike more responsive and efficient. 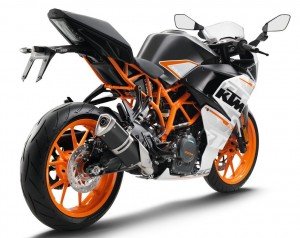 The engine’s power output has remained the same and the overall dry weight of the bike is still 147kg.

A slipper clutch has also been added to reduce the rear wheel chatter that some riders have been experiencing under hard down shifting. The slipper clutch can be purchased separately as well, and retro-fitted to previous models of the RC390.

The size of the front brake disc has been increased by 20mm to 320mm.

Some of the more minor changes are the inclusion of adjustable clutch and brake levers, larger mirrors to improve view and additional padding in the seat to improve comfort.

The bike is being produced in India by Bajaj Auto which owns a significant stake in KTM’s holding company.

There has been no definite arrival date announced for Australia.