Indian Motorcycle has produced the Scout LE, the first in a series of locally inspired Scout Limited Edition models.

Only 10 of the Scout LE have been produced, making Indian the latest manufacturer to release a very limited edition motorcycle.

Using a standard Scout as the base, Indian has added some genuine accessories from its wide range and given the bike some old-school highlights.

The Scout LE has chrome wire wheels, a 1920’s solo tan leather seat and the tank has been finished with a custom hand painted two-tone paint job featuring a painted Indian warbonnet.

The customising adds over $3,000 worth of value to the bike.

The Scout model name has a rich heritage.

It is associated with Burt Munro and “The World’s Fastest Indian”, and the Scout was the original bike of choice for the Wall of Death.

The Scout was also the bike used by the Indian “Wrecking Crew”, a team of 3 racers who were very successful against the Harley-Davidson teams in post World War II racing in the US. 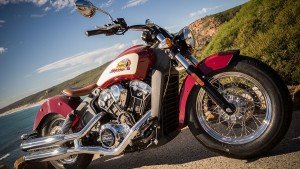 The current Scout shares the name, but of course is a very different bike today.

The 1131cc V-Twin engine generates 74kW and 98Nm, and it’s fairly heavy at 256kg but is well balanced and agile for such a big bike.

It’s also a favourite with riders looking for something with a little character that can be customised fairly easily.

The Scout LE, and the limited edition machines to come in the future, takes advantage of that popularity.

The Scout LE is priced from $20,995 ride away, but will be available only while those very limited stocks last.