Riding Morocco: Chasing the Dakar features our very own radio/podcast co-host Christophe Barriere-Varju, and was broadcast on the National Geographic channel across 170 countries worldwide last June.

But if you missed it, you will now be able to watch it – free of charge – from Friday 30th September 2016 on Dream Racer Television.

The documentary follows Christophe (from the Multi-Award Winning film Dream Racer) and fellow Australian, TV presenter & former Miss World and Miss Universe Australia Laura Csortan, as they ride the new Honda Africa Twin and follow the route of the original Dakar Rally from Marrakech in Morocco through mountains, gorges, rivers and deserts to reach the Moroccan Sahara.

The Dream Racer Television Video-On-Demand platform already delivers the feature film Dream Racer and has reached viewers from over 35 countries in the 80 days since it was launched.

The state of the art video delivery platform is similar to other streaming services in quality.

The platform uses dynamic adaptive streaming, which means the quality (and the size) changes dynamically based upon the speed of the user’s internet connection and automatically switches based on the user’s bandwidth. 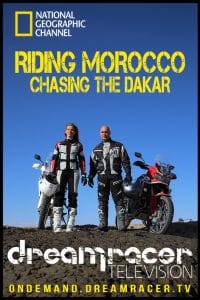 Christophe said, “We are pleased to be working once again with National Geographic and greatly value the trust placed in our newly launched Video-On-Demand platform to show this film worldwide.”

“This would not have been possible without the continued support from Fox, National Geographic and Honda.”

“Having Riding Morocco: Chasing the Dakar fits our strategy perfectly as our goal is to provide more content to viewers on the themes of adventure, discovery, dreams, determination, and resilience to inspire people to get out there and experience the beautiful things the world has to offer.”

“Having a film produced by National Geographic on our platform is a great honour”, says Christophe.

Story Plot: Two adventure bikers take on the journey of a lifetime travelling through Morocco, North Africa, on the trail of the ultimate biking challenge, the Dakar Rally.

One rider, Christophe Barriere-Varju, has competed in the Dakar Rally four times. The other, Laura Csortan, has never set a wheel off road before.

Starting in Marrakech, Morocco, they must make their way through mountains, gorges, rivers and deserts to reach the Moroccan Sahara.

Christophe shares his knowledge of what it takes to be an off-road adventurer whilst Laura pushes her biking skills to the limits and experiences a journey like never before.

Will they make it to their final destination of the Sahara Desert or will the journey of a lifetime be too much for an off-road novice?

Riding Morocco: Chasing the Dakar is set to be released worldwide on Dream Racer Television on 30 September 2016, and to watch this fascinating documentary all you have to do is visit https://ondemand.dreamracer.tv