Tex and Bundy are the most recognisable motorcycle riding duo in Australia.

Tex O’Grady and his stumpy tailed cattle dog Bundy have been a team since 2006, and have travelled over 960,000km raising funds and awareness for various charities.

Bundy rides on the tank of Tex’s Moto Guzzi Stelvio, something that is actually prohibited under Australian Road Rule 297-3.

But Bundy is special, and is the only dog in Australia with a ministerial declaration that allows her to do so. 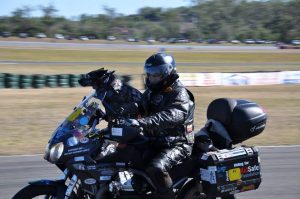 She is also credited with being the fastest dog in the world having been officially clocked at 283km/h at Sydney Motorsport Park at Eastern Creek.

And Bundy also joins Tex on a jet-ski at times, she’s even travelled from Philip Island to Cairns on one!

Join Steve McDowall and Christophe Barriere-Varju as they chat to Tex about Bundy, the very special relationship they have, and how the two of them bring so much joy to people in need.

Tex opens up about his time as a submariner, how Bundy came into his life, and shares some very funny stories about their experiences – including one involving an old Police sergeant, an RBT unit and Bundy in a Santa suit!

To keep up to date with Tex and Bundy you can check out their website at www.texandbundy.com.au or their Facebook page Tex & Bundy Charity Fundraisers.