With a successful practice run completed, Triumph is now looking to September for its attempt at breaking the motorcycle land speed record.

The team has confirmed overnight that the attempt will take place mid-September.

Despite having a good course surface for testing the team felt that the salt wasn’t yet fully capable of supporting a top-speed streamliner run.

After consultation with FIM course manager Mike Cook, the team are targeting the September dates as the best possible opportunity for the optimal course conditions required for the record attempt.

The practice week, which ended with a 274.2mph run on Tuesday 9th August, demonstrated that both the Triumph Infor Rocket Streamliner and rider Guy Martin are ready for the task ahead. 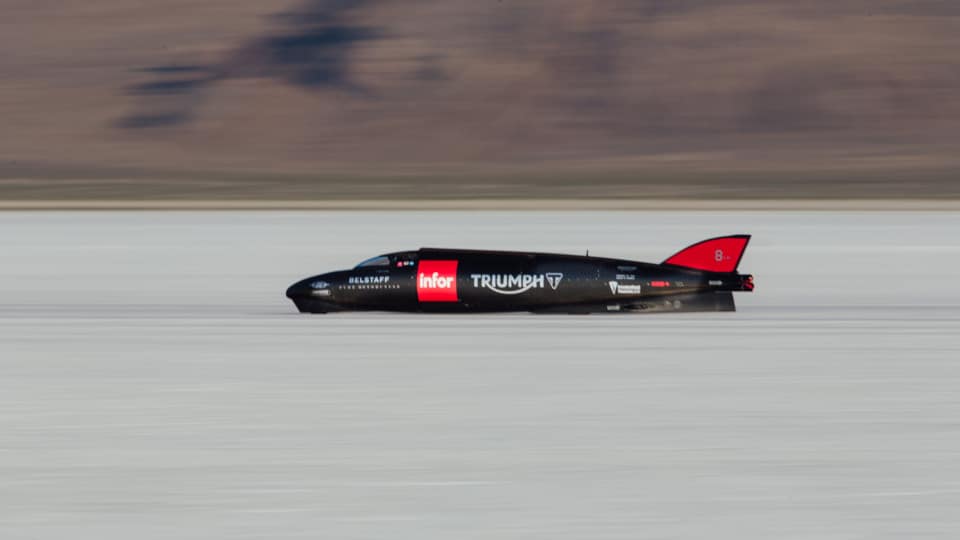 Martin’s first week in the streamliner saw him master the controls of the 1,000 bhp streamliner very quickly – achieving all of the goals set by Crew Chief and Triumph Infor Rocket Streamliner designer Matt Markstaller and his team.

The team and its pilot, TT star Guy Martin, will now return to the famous Bonneville salt flats and attempt to beat the current 376.8 mph (605.697 km/h) record speed on an 11 mile-long course.

Crew Chief Matt Markstaller said, “While conditions were some of the best I have seen over the last few years, we feel there is still some room for improvement.”

“When chasing a record such as this on two wheels the conditions have to be the very best they can be, to give us the greatest chance of achieving the speeds we require to set a new record.”

“We feel that waiting a few further weeks will provide us with even better conditions and put us in the ideal position to make our record attempt.”