The new Vanguard Roadster has been well received at its world debut last weekend at the International Motorcycle Show in New York City.

The official unveiling of the Roadster marks a new era in American motorcycles.

On show in New York was a running prototype of a totally new American motorcycle – conceived, designed and built in New York City.

The Vanguard Roadster is scheduled to go into production in 2018, and is the first of three bikes to be built by the new company.

All three will share the same powertrain platform and Vanguard says the different models will cover all riding positions: Roadster, Cruiser and Racer.

The bike’s radical design was expected to polarise the riding community, but is attracting plenty of attention because it has brought a fresh perspective and unique approach to modern motorcycles.

Edward Jacobs worked as Confederate’s chief designer for six years, and the other founder is “serial entrepreneur” Francois-Xavier Terny who has a background in private equity and investment roles.

Together they set out to create something unusual, rather than “a different version of the same old thing”, and at an affordable price.

The Vanguard Roadster is powered by a 117 cubic inch (1917 cc) air-cooled 56 degree V-twin based the S&S X-Wedge. The engine is load bearing and an integral part of the bike’s structure, eliminating the need for a main frame.

A six speed transmission and shaft drive complete the powertrain.

Suspension is from Ohlins and fully adjustable on the front, brakes are supplied by Brembo and the swingarm is single sided.

As well as the frameless design, the bike has a number of other innovative features.

The exhaust is routed through the rear subframe and seat.

There’s a tablet-sized digital dashboard linked to a rear vision camera in the back of the seat that replaces traditional mirrors.

Pricing for the Vanguard Roadster is expected to start at US $29,995. 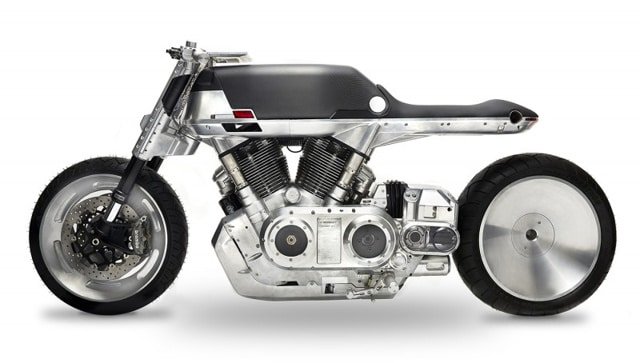