The Tatts Finke Desert Race is done and dusted for another year with Yamaha putting on a good showing winning in several categories.

Daymon Stokie took out the main competition in the motorcycle division in a time of four hours eleven minutes.

It was a clean sweep of the top five places in the Under 1200cc UTV category for the Yamaha YXZ1000R and a trifecta in the ATV class.

Taking out first place in the UTVs was the team of brothers, Jake and Aiden Williams (pictured) coming back from fifth place on the first day at Finke, making up 14 minutes to win by a minute.

It was also a family affair in the ATV group with Van Vliet brothers, Mitchell and Jake finishing one-two on their Yamaha YFZ450Rs. 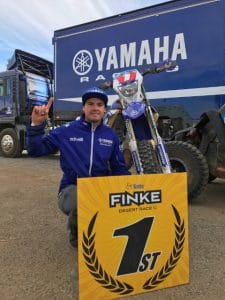 Stokie finished a tight race in a time of 4 hours and 11 minutes ahead of Ivan Long by only 3 minutes.

The return trip from Alice Springs to Finke over two days was led by David Walsh after the first leg with Stokie in second.

The Active8 Yamalube Yamaha rider gained the lead after Walsh was left stranded and didn’t look back until the finish line.

Mounted on his Yamaha WR500F, Stokie had to endure a hand injury from a previous event to hold out his competition in the Northern Territory.

Daymon says the win was unbelievable with lady luck on his side.

“I knew catching David was a tough ask but sometimes things go your way and we got a little lucky with that but that’s the way it goes at Finke, it just isn’t an easy race to win.”