The SR400 is being offered in yellow 60th anniversary livery, and is set to become a collectible model because only 10 units have been allocated to Australia.

The SR400 is often forgotten and overlooked by buyers, yet the bike is a favourite with customisers.

While the current generation of the bike has only been with us since 2014, its heritage takes us back to the 1970’s – and that includes the kick starter!

In fact it can only be kick started, but Yamaha has weaved a little magic technology into the SR400 to make the job a little easier. 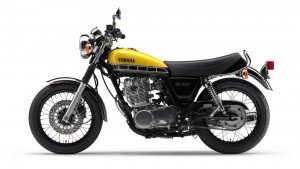 The SR400 is a classic model with true retro styling, a light and agile chassis, and is powered by a single cylinder fuel injected 400cc engine.

Power delivery is smooth and the whole riding experience is relaxed and easy, but the SR400 isn’t the highest performing bike you’ll ever ride.

Output is around 17kW and torque is quoted as 27Nm.

It does have a noticeable powerband from about 4000 to 7000rpm that adds some excitement to riding the bike, something older riders will remember with a passion.

But it’s not performance that you buy this bike for, it’s character.

The current generation SR400 has wire-spoke wheels with inner tubes and a rear drum brake.

The bike appeals to riders looking for a motorcycle with a real heritage and character, and one that can be easily customised.

Many SR400’s have been modified into a café racer, street scrambler or bobber.

Yamaha says it is aimed at the many riders who are looking to rediscover the soul of motorcycling.

And the 60th Anniversary treatment makes the bike even more appealing.