More news has come through from both Toby Price and Rodney Faggotter who both bowed out of the 2017 Dakar today.

The riders faced tough terrain in the Bolivian Andes, complicated by the effects of having less oxygen in the high altitudes.

After making mistakes with navigation and dropping down the leaderboard yesterday, Toby was on a mission to regain some of the lost time.

But his decision to push hard ultimately cost him the race and caused some serious injuries, including a broken left leg (femur).

He had taken the lead in the stage, and was just 45km from completing it when he crashed at around 90km/h. 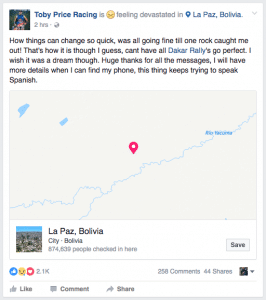 Toby was airlifted to hospital in La Paz, Bolivia and although there are no details on his condition he has posted to social media this evening.

“How things can change so quick, was all going fine till one rock caught me out! That’s how it is though I guess, can’t have all Dakar Rally’s go perfect.”

Rival Paulo Goncalves came across Toby after the crash, and in an act of true sportsmanship put his own race in jeopardy staying with Toby until help arrived.

Goncalves was philosophical about losing the time, saying “Doesn’t matter the outcome today. Toby Price fell in front of me and needed my help. I will catch up later.”

He is hopeful the organisers will credit him the time he lost while stopped and helping Price.

Rodney failed to complete the stage this morning, causing concern among the team and family. A simple post from Yamaha Racing this morning said it had been a eventful day, but offered no more explanation.

After an agonising 3 1/2 hour wait, Rodney’s partner Cherie posted on Facebook that the reason for not finishing today was mechanical.

“It was mechanical, I don’t know the specifics (the line was hard to hear him) but it has to do with the engine and Rod was unable to fix it.

Unfortunately it’s with a heavy heart that I let you all know that he’s out for the rest of the race.”

There are two Aussie riders left in the 2017 Dakar, Todd Smith and Matthew Hart.