Lane filtering – riding a motorcycle at low speed between stationary or slow moving vehicles travelling in the same direction – is legal under certain conditions in Queensland, NSW, Victoria and is currently under trial in the ACT.

It is also legal in several other countries, including the UK where it has been a common and well observed practice for many years.

But as a motorcyclist, are you doing it safely? And legally?

The rules in Australia stipulate a maximum speed of 30 km/h for both the rider and the surrounding traffic. Other rules apply regarding kerbside lanes, school zones and the type of licence you hold.

Queensland is the only state in Australia that also allows riders to use the road shoulder in speed zones of 90 km/h or greater, but the maximum speed of 30 km/h still applies. 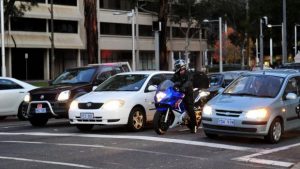 The debate over lane filtering is always intense and divisive, with plenty of points both for and against.

Those who support lane filtering suggest it is safer for a motorcyclist to move between cars to get out of their way, preventing rear end crashes.

Those against argue that with motorcycles representing less than 5% of the registered road fleet in Australia it’s hardly going to help move cars through traffic faster.

The “against” argument also points out that moving between cars places the motorcyclist in a confined space, and reduces the two things most important to a rider’s safety – time and SPACE.

From a car driver’s perspective there are at least three issues – many drivers are unaware that it is legal in some states, they are normally not looking for a motorcycle moving between cars, and impatient and frustrated car drivers are likely to become agitated at the sight of a motorcycle squeezing through, potentially triggering road rage.

One thing is for certain, and that is that the motorcyclist has the most to gain by lane filtering NOT the car drivers.

And if we’re really honest with ourselves, the greatest benefit to a motorcyclist is simply that we can get to where we’re going sooner.

Lane filtering leaves a motorcycle rider particularly vulnerable but there are things a rider can do to improve their safety.

The first, and probably most important thing to do, is to accept that your safety is your own responsibility and that you are not at the mercy of other road users.

All road users make mistakes, some even take deliberate actions to put themselves and others at risk, but there is no point in any of us blaming “the other guy” when something goes wrong.

There is always something we could do to eliminate the risk, or at least minimise the consequences.

Certainly further education campaigns are necessary as well – but that applies to both car drivers AND motorcycle riders.

The Queensland Government has produced this video on lane filtering, and the NSW equivalent is here.

Here’s our shortlist of advice for riders if you decide to lane filter:

If done properly, lane filtering can be one of the great benefits of riding a bike around town and for commuting. But we always have to weigh up the risks we take against the benefits we might gain.

Ultimately, it’s up to us to make our ride a safe one.

What are your thoughts on lane filtering? Do you have any other suggestions on how to do it safely?

3 Comments on Are You Lane Filtering Safely?