As the 2017 Dakar gets underway this afternoon (Australian time) a total of 143 motorcycles will cross the start line in Asunción, the capital and largest city of Paraguay.

Of course all eyes will be on last year’s winner and the first Australian to ever win the Dakar, Toby Price.

Toby is back again on the Red Bull KTM and this year carries the prized number “1” on the bike.

It’s Toby’s third Dakar, having made his debut only two years ago in which he made the podium with a third place. 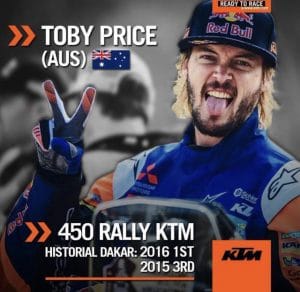 catapulted the 29 year old from Singleton into the world spotlight, and he says that “winning in 2016 means the target is very definitely on his back” this year.

“On the other hand”, he says, “once you have won it once, you know it is possible”.

But Toby’s not the only Australian taking on the Dakar this year – there are 4 Australian riders in total.

Rodney Faggotter from Longreach is having his third run in the event and is on board a factory Yamaha WRF 450.

He says his job will be to look after the team’s lead riders Adrien Van Beveren and Helder Rodrigues and that part of the deal is that he will have to sacrifice his result if they run into a problem.

But Rodney also recognises it’s the opportunity of a lifetime and said “I fully intend to enjoy every minute of it!”

There’s also Todd Smith from Condobolin in NSW who has competed in the Dakar before with Honda but is listed this year as riding a KTM 450 RR, and first timer Matthew Hart from Blacktown in NSW has a privately sponsored Husqvarna FR450 Rally to tackle the event.

Among the other riders is a special friend of Motorcycle Life – Manuel Lucchese.

Manuel spoke to us last year about his preparations for the event – he has built his Yamaha WRF 450 Rally in his grandparent’s kitchen! – and his plans to do the event in the toughest way by running in the “malle-moto” class.

Malle-moto means Manuel will ride the event with no support team, no mechanic, and no one to help with a tent or preparing riding gear for the next day.

He will have a metal chest filled with spares, tools and any personal belongings he can fit in transported to each check point by the organisers each day.

Also among this year’s entrants are 3 female riders.

Anastasiya Nifontova is competing for the first time with an Husqvarna FR450 Rally. At the age of 37, Anastasiya will become the first Russian woman to compete in the Dakar in the bike class.

Laia Sanz (KTM 450 Rally Replica) from Barcelona is returning for her 7th Dakar, and 47 year old Rosa Romero Font (Team Himoinsa KTM 450) from Spain is on her 6th run in the event.

The 2017 Dakar finishes in Buenos Aires on the 14th January.

SBS will again have daily coverage of the Dakar from 5.30pm to 6.00pm (check your local TV guides to confirm) and we will bring you as many updates as we can.