Who’d have thought the dramas surrounding the Takata air bag recalls would have found their way to the motorcycle world?

But then no one imagined you’d find an airbag in a motorcycle until Honda started fitting them to the Goldwing in 2006 either.

It seems Honda’s big tourer is now a part of the massive global recall of potentially faulty airbags supplied by Japanese company Takata.

Around 2,700 motorcycles are possibly affected.

No recalls have been issued anywhere else in the world just yet, however in light of how the Takata saga has unfolded in the car world it won’t be surprising to hear of further recall notices in other regions.

Luxury model Goldwings brought into Australia are fitted with an airbag as standard equipment. 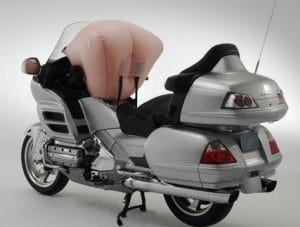 We will be monitoring the situation and reporting on any updates as they come through.

Fitting the airbag to the Goldwing was an innovative move by Honda and it was met with varying degrees of curiosity, praise, and bewilderment – even criticism.

But reports in 2009 of a 57 year old German engineer who survived a crash that all but destroyed the front end of his Goldwing suddenly made the world take a different view.

The force of the impact with a tree destroyed the front panel of his Goldwing, snapping the left fork leg and smashing the engine, but Willi Hansel believes the airbag saved his life.

At the time Honda Australia General Manager for Motorcycles, Tony Hinton, said “Although it is never a good thing when a motorcyclist gets injured, this is a fantastic story in many respects”.

This video shows just how much the airbag can protect the rider in a full on frontal impact.