Regular riders of the famous Lions Road will be disappointed that upgrades to the bridges will stop you riding it for the next 6 months.

The Kyogle council has received $2 million dollars from the “Australian Government Bridge Renewal” program. During the project, there will be a total of three road closures between January and July 2017.

The bridges with varying weight / load limits has impacted on the local beef, timber and tourism trades for a number of years. These limits have also impacted the response time for local emergency services attending the area. 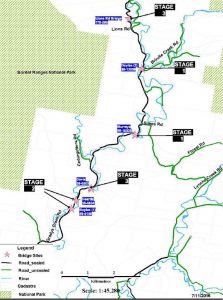 The replacement for Murrays Bridge is expected to be complete by 31 March 2017.

Stage Two of the construction process includes Boyles Bridge (No.1) – 5.15km from the Gradys Road and Lions Road intersection. The bridge will remain insitu and be used as a bypass for traffic whist the new bridge is being constructed. Unfortunately Heards Bridge which has a 20 tonne limit , just down from Boyles Bridge (No.1) will be closed to all traffic and local residents have been informed of detours for minimal inconvenience.

Stage Three entails the closure of Davis Bridge (10 tonne capacity). This bridge is the first bridge north of Fernhill Dr and will be closed to all traffic during the construction phase. Again local residents have been informed of the recognised detours available.

Last but not least is the Lions Rd Bridge which will be of slightly different design, It will be an Australian Defence Force steel truss constructed dual lane bridge, again causing a complete closure to the road.

Kyogle Council has told Motorcycle Life that each stage of this project will take approximately two months to complete.

Kyogle council has stated the benefits to the community as being:-

Should you have any concerns or questions you can contact Kyogle Council at,