Nine-time NZ superbike champion Andrew Stroud will ride at this year’s Island Classic on board a Britten V1000.

In its 24th consecutive year, the Island Classic is fiercely contested between international rivals Australia, the UK, USA, New Zealand and Ireland with a points score challenge for the perpetual Phil Irving trophy.

Five national squads will race in this year’s International Challenge at Phillip Island Raceway from January 27-29, with the Irish taking on the four experienced teams – defending champions the UK, Australia – who won the title from its inception in 2005 to 2014 – the USA and New Zealand.

Special guest riders and their machines have always been a part of the Island Classic, and the 2017 event will be no different. 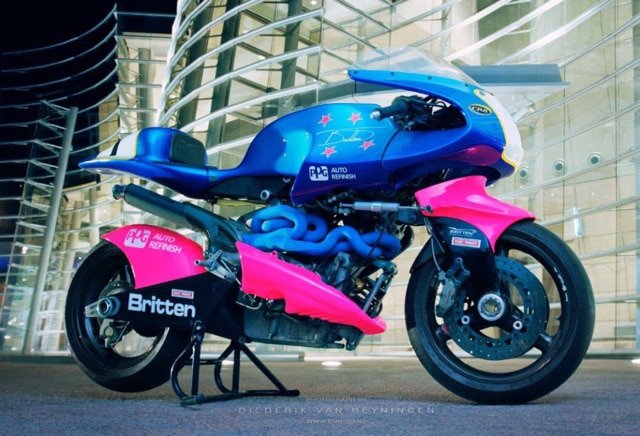 Stroud enjoyed a huge amount of success with the awesome home-built Britten V1000 during the 1990s in New Zealand, Australia, America and Europe.

The V1000 that Stroud will ride on demonstration laps at the Phillip Island Grand Prix Circuit is the same one that he raced at the Assen BEARS race in 1995. It’s now owned by New Zealander Kevin Grant.

The bike was way ahead of its time, and the gifted John Britten who designed and constructed the V1000 in his home workshop, passed away at the age of 42 just three weeks after the BEARS win.

The radically designed machine included an extensive use of carbon fibre on the chassis, girder forks, swingarm and wheels, and air ducts directed through the petrol tank to an underseat radiator.

The machine also has a home-built engine management system.

With a claimed dry weight of just 138kg, and power output of about 166hp from the water-cooled 60-degree V-twin, that amounts to a devastatingly effective tool.

Champions from past and present converge on the famous Phillip Island Circuit from all over the world for the classic so you never know who you might bump into and what machinery they will on.

For further information on the classic www.islandclassic.com.au