The announcement earlier this week that Indian Motorcycle is planning a return to the AMA Pro Flat Track Racing scene suggests a lot more than first meets the eye.

Only two weeks after Harley-Davidson showed off its new XG750R Flat Track Racer, Indian has announced it will also be returning to the racing series. 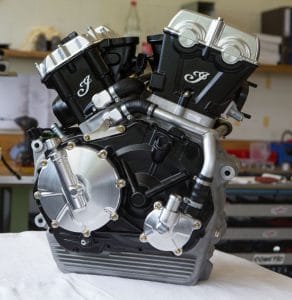 The company has not had a full-factory racing effort since the 1950s.

But will these new 750cc engines lead to a whole new range of production motorcycles? Or will the engines remain as specially built units just for racing?

Either way it points to an increase in the emphasis both manufacturers are placing on their racing efforts, and history suggests that regardless of whether it means new machines there will certainly be developments that will find their way into our production machines.

President of Motorcycles for Polaris Industries, Steve Menneto, reinforced the importance the company is placing on its return to racing.

“We are very excited to return to the AMA Circuit,” he says. “We have established the new Indian Chief and Scout series as the cornerstones of our production line-up, and now is the time for us to return to racing in a big way.”

AMA Pro Flat Track racing is highly competitive and has evolved into a demanding, technical and specialised event, and at one stage Indian Motorcycle dominated the sport with legendary riders and motorcycles.

Probably best-known was the Indian Motorcycle Wrecking Crew – Bill Tuman, Bobby Hill and Ernie Beckman – who decimated the competition from the late 40’s to mid 50’s.

The new Indian Flat Track racer will be ridden by multi-time AMA Grand National Champion Jared Mees, who has joined the Indian Motorcycle Racing Team as a test rider for 2016.