Yamaha released its leaning multi-wheel scooter, the Tricity 125, to the Thai market in April, 2014 and to Australia in 2015.

In the two years since it was launched it has earned a strong following, but mostly in Europe.

It hasn’t been a great seller in Australia, but that’s probably more through being overlooked by buyers than for any other reason.

The three-wheeled scooter offers many advantages, particularly for those who want an easy transition from four wheels to two.

The design is inherently stable which gives riders plenty of confidence, and making the scooter lean in a similar way to a two wheel machine gives riders the feeling of being on a regular motorcycle.

The three wheel design also gives the scooter an incredible ability to deal with rough surfaces even when leaning.

This week Yamaha unveiled the Tricity 155, its next generation three wheeler. 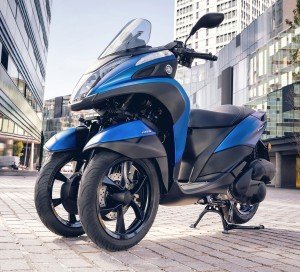 It has a newly designed frame that Yamaha claims improves rigidity, larger footboard areas to provide a more comfortable riding position and an expanded 23.5-litre under seat storage area.

There’s also an accessories compartment with a DC power socket to charge devices on the go.

The scooter also has a new parking brake and LED headlights.

But the biggest improvement is in the new liquid-cooled 155cc engine.

The new engine isn’t a revised version of the current engine, but a totally new engine built around Yamaha’s Blue Core initiative of maximum efficiency with minimal environmental impact.

Yamaha unveiled the initiative in 2014 with the aim of improving the fuel efficiency of its motorcycles by 50% compared to 2008 models.

The new Trinity 155 is to be built in Thailand and is scheduled for world release in September, and will be shipping into Europe first and then to Japan.

There is no word yet on Australian availability or pricing.