Harley-Davidson has released the 2016 Roadster to Australian dealers, and the first impressions of the bike are that this is what we’ve always thought the Sportster should be.

The new Roadster is built on the same frame and 1,202cc air-cooled V-twin engine as the current model Sportster, but has really benefited from upgrades to the suspension, brakes, and styling.

The most obvious change in the front end of the bike is the dual disk brakes that have brought a new level of braking performance to the Roadster. 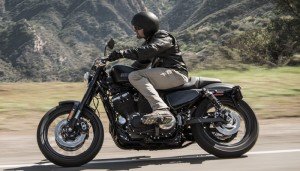 The suspension has been given some serious attention and now has upside-down forks and what Harley-Davidson are calling “massive” triple clamps.

There is also more travel in the suspension that makes it more compliant.

The rear suspension is now adjustable as well.

While the suspension is a big improvement, the bike still lacks the ground clearance to really get into corners hard.

The handlebars have been set lower forcing the rider into a more aggressive and hunched forward riding position.

And the other significant change to the bike is the new instrumentation.

The Roadster adds to a long lineage of bikes that has served Harley-Davison well for nearly 60 years!

The first model in the Sportster line was released in 1957.

But despite its ties to the current Sportster range, this bike is clearly aimed at a different, and hopefully new, market for Harley-Davidson.

It has enough modern technology and hints of a more sporty nature to attract new buyers to the brand who might otherwise look towards a BMW RnineT or Triumph T120.

But it would also appeal to traditional Harley-Davidson buyers who are wanting to be a little more adventurous than the current crop of models can deliver.

All up, it seems like a good balance between old and new, and at just $19,495 plus on roads the price is right too.