Many of us know Keanu Reeves for his acting skills in movies such as “Point Break”, “Speed” and “The Matrix” trilogy.

But little is made of his intense passion for motorcycles, and the fact that together with business partner Gard Hollinger, Keanu Reeves owns a motorcycle company!

Keanu has been riding motorcycles since he was 22 (he’s now 51) and says he never had any plans to get into the motorcycle business.

But in 2006 he took one of his Harley-Davidson’s to Gard Hollinger, an L.A. chopper guru, to customise the seat.

Gard refused to fix the seat, and wound up designing an entirely custom-made motorcycle for Keanu instead.

One thing lead to another, and four years later they had a motorcycle.

The story then goes that Keanu said to Gard, “That’s an amazing machine. It rides amazing. Do you wanna start a motorcycle company?”

Despite his initial reluctance, Gard agreed and they started Arch Motorcycle Company in 2011.

The company currently produces a single model – the KRGT-1 – in its unmarked brick factory near Los Angeles International Airport.

It’s a handcrafted V-twin machine with a starting price of USD $78,000.

The bike is becoming a cult favourite because of its elegant design, quality workmanship and superior power and handling.

Arch have worked with S&S to design a downdraft fuel injection system which allows the air intakes to be moved away from the side of the engine and the rider’s legs.

Instead, the air intakes sit between the two fuel cells, which themselves are an interesting piece of engineering.

The fuel tank is machined from 240kg of billet aluminium, a 66 hour process that produces two 4kg cells that are then custom finished and joined. The right cell interior is reinforced and serves as a structural chassis member. 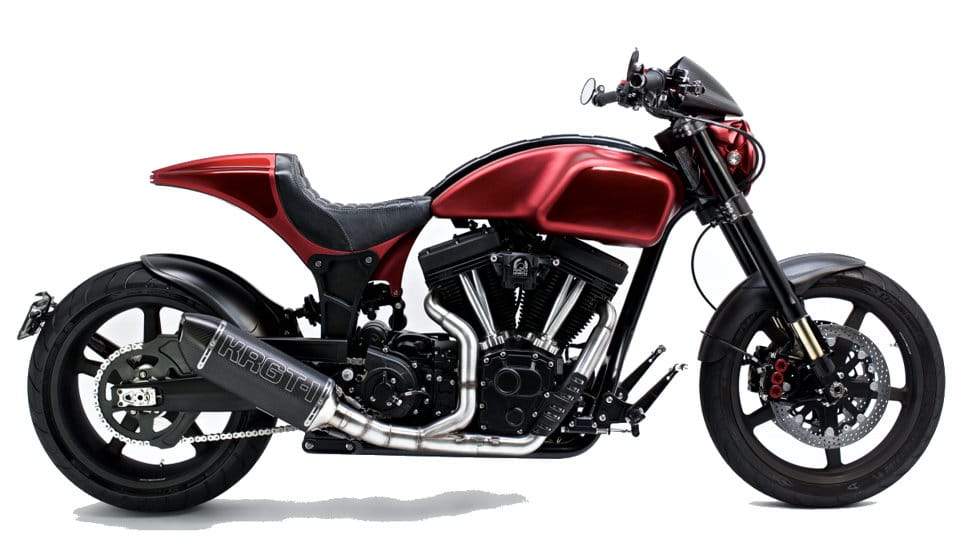 In all, over 300 machine-hours using state of the art CNC and water-jet-machinery is required to produce the parts for each KRGT-1.

The frame is a combination of steel tube and billet steel, with billet aluminium structural members. The swingarm is also machined from aluminium and titanium is used for the axle adjusters.

Keanu says that each bike is more like a work of art, right down to the hand-stitched leather seats and engine parts that look more like pieces of jewellery.

Their chief mission is not to make money, but to keep production levels low and to make a motorcycle that buyers ride and collect for decade.

They anticipate building more models in the future.

Keanu says he tries to keep his acting career and motorcycle company separate, but the passion for bikes is always there and he almost always takes a motorcycle to his movie sets.

“For me, riding is a kind of freedom”, he says.