Australia’s most progressive motorcycle developer – Motorcycle Innovation – has announced it is moving ahead with designing and building an all-new Motoinno TS3 Shockwave model.

A recent $250,000 cash injection from private Queensland angel investor ACAC Innovation and a matching $250,000 grant from the Queensland Government Ignite Ideas Fund has given Motorcycle Innovation the impetus to break new ground with their patented ‘Motoinno TS3’ chassis technology.

Imagine a bike that allows you to brake hard mid corner and still holds it’s intended line – that’s what the TS3 does! 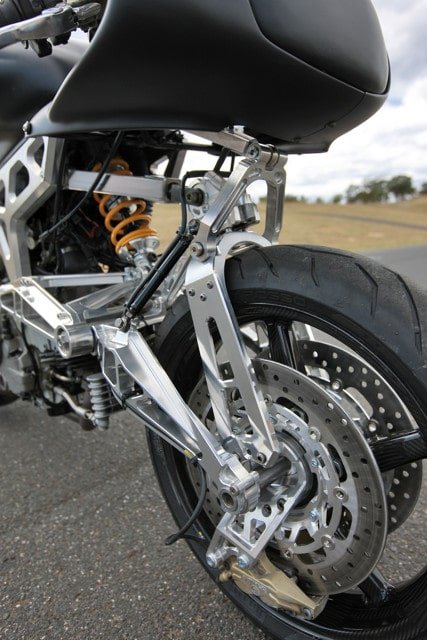 The TS3 eliminates the dangerous oscillation harmonics inherent in telescopic fork technology that has been the bane of engineers and riders alike ever since its invention.

Empirical same-day testing also showed the prototype to be up to one second per corner faster compared to a Suzuki GSX-R750.

“The bespoke, high-end luxury road bike is based on the Ducati 1198cc Testastretta 11º engine – but that’s where the similarity to any other motorcycle starts and ends.”

“The Shockwave will use the Ducati Testastretta V-twin engine as a fully stressed chassis member”, he says.

“This will entail front and rear swingarm structures entirely made of carbon composites, plus high-end metals designed to strengthen and lighten the motorcycle’s overall weight to around 110kg. That’s getting on for half the weight of the model from which the engine is derived.”

“With unique styling and patented componentry, the Motoinno Shockwave will set new standards in handling and braking, as well as in power to weight ratios for motorcycles”, Mr Van Steenwyk said.

The TS3 has greater inline stability, is able to brake later and harder into and through a corner, turn tighter with a reduced lean angle, and allows the rider to get back on the throttle earlier on the exit of the corner.

The TS3 technology also holds an exciting potential for race teams and manufacturers, and in addition to designing and building the road going TS3 Shockwave model, Motorcycle Innovation is planning on building a TS3 Moto2 race bike.

This will put the company’s design technology to the test in one the most extreme and competitive of race environments.

Following initial track testing in Australia planned for late 2017, the Moto2 test prototype will be transported to Spain for continued testing in the European CEV competition of 2018.

This will enable a direct comparison with similarly set-up Moto2 motorcycles.

Just how far the innovative Aussie TS3 technology penetrates the world market is yet to be seen, but clearly Motorcycle Innovation has an exciting and potentially ground-breaking technology under patent.

More information about Motoinno and the TS3 technology can be found at www.motoinno.com.au or their Facebook page.