BMW Motorrad has given us another glimpse into the future this week by unveiling the next of its “Vision Vehicles”.

In its centenary year, the BMW Group is looking further into the future than ever before and developing the series of “Vision Vehicles” to address people’s mobility needs in about three decades from now.

The latest to be unveiled is the BMW Motorrad VISION NEXT 100 concept motorcycle.

Like the three vehicles in the “Vision Vehicles” series before it – a BMW, Mini and Rolls-Royce – it is purely a concept and BMW Motorrad has declined to say if the bike will ever be produced.

Instead, it is a thought provoking interpretation of how motorcycles might look in the years and decades to come.

The company’s vision is one where the rider doesn’t need to wear a helmet and protective clothing because the assistance systems built into the bike will not only anticipate and advise when action is needed but also intervene, when required, to keep riders safe.

The motorcycle is connected to the outside world and takes crucial data from its surroundings, so it knows exactly what lies ahead.

Information is exchanged between the rider and bike through the visor – essentially a pair of data glasses (think Google Glass but much more sophisticated and functional).

These are controlled by the rider’s eye movements – looking up or down changes the content that appears, and looking straight ahead switches the information off completely.

The proposal is that the motorcycle will also have a self-balancing system to keep it upright both when standing and in motion, so in theory it can never fall over. 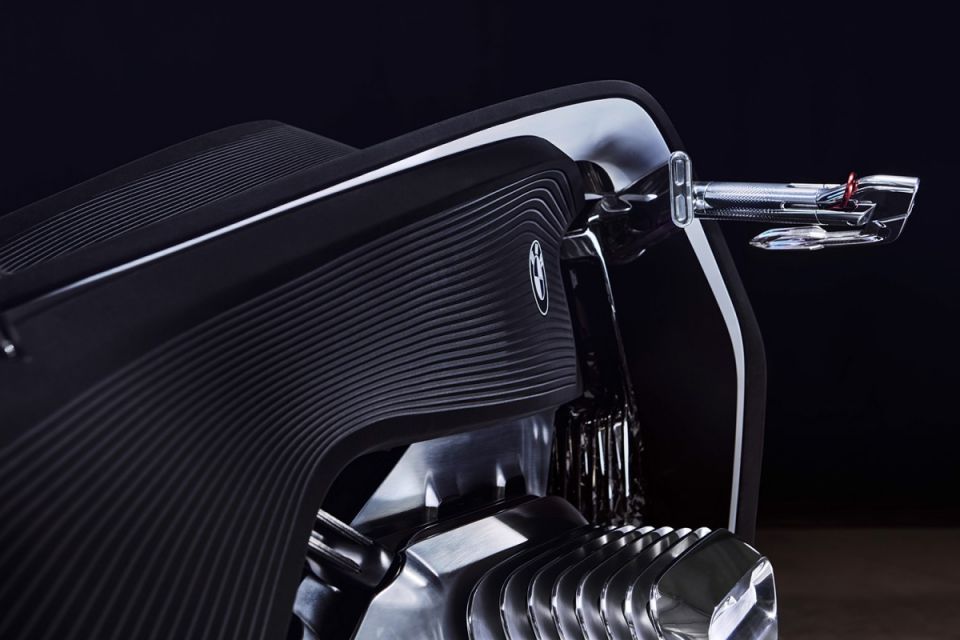 That makes it suitable for riders of all skill levels, from beginners to very experienced riders who want to push the boundaries just that little bit more.

The frame is a single, integrated unit that extends from the front to the rear wheel and is flexible, allowing the bike to be steered without the various joints found on today’s motorcycles. Turning the handlebar adjusts the entire frame, changing the direction of the bike.

The black triangle design of the frame is a throwback to the 1923 R32 – the very first bike BMW ever produced.

In the middle of the triangle frame sits the zero-emissions drive unit that has been designed in the image of the traditional BMW boxer engine.

Its appearance changes depending on the circumstances: when the bike is resting, the power unit is compact and extends outwards when the bike moves off to enhance aerodynamics and protect the rider from the elements.

BMW says that suspension damping is provided by the tyres, whose variable tread actively adjusts to suit ground conditions and ensure the best possible grip in any situation. Now that sounds pretty out there!!

In producing the four “Vision Vehicles”, BMW has addressed some key themes – autonomous and emission-free driving, connectivity and mobility services.

Head of Design at BMW Motorrad, Edgar Heinrich, says “Normally, when we develop a motorcycle, we tend to think 5 to 10 years in advance. On this occasion, we looked much further ahead and found the experience especially exciting.”

“The team was thinking decades in advance. In tomorrow’s world, connectivity and digitalisation will be all-encompassing. Most vehicles will be driverless, and life will be organised largely by digital services. More and more of the world’s population will be living in urban areas.”

However, despite its technology, any future bike will not be fully autonomous.

“We do not envision autonomy on motorcycles,” said Heinrich. 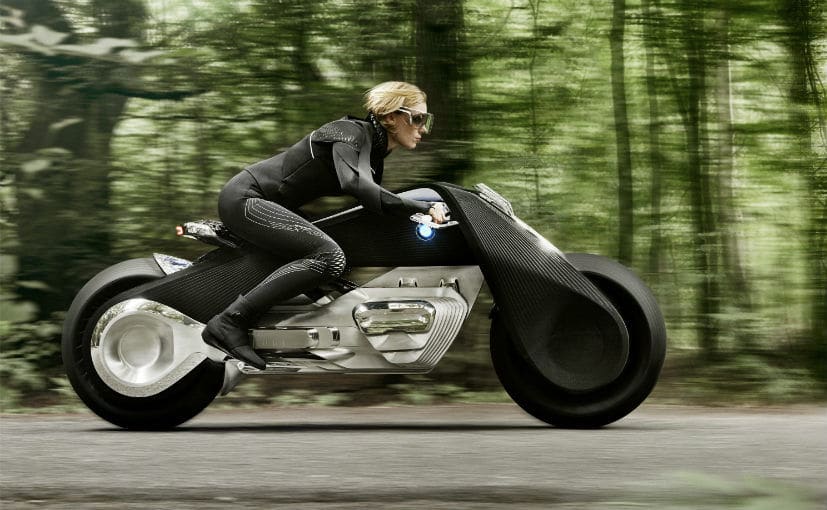