The CFMoto 400NK and an updated 650NK are now available in dealerships.

CFMoto has been in operation for over 20 years and is one of China’s largest manufacturers with over 1,600 staff. The company is also the largest exporter of ATVs and UTVs in China.

In 2013, CFMoto announced a strategic partnership with KTM which sees small capacity KTM motorcycles built by CFMoto for the Chinese market.

That arrangement also gives CFMoto access to technical and design resources from Austria, which is helping to lift CFMoto’s capabilities and quality to a world standard.

The 400NK has been in the pipeline for a while, and was originally scheduled for release in October 2015.

The 400NK, and its larger sibling the 650NK, share the same platform and have aggressive styling created by the collaboration between CFMoto and Austrian design powerhouse Kiska.

Kiska has been designing KTM motorcycles since the early 90’s.

Both bikes weigh in at 193kg dry, making the 400NK one of the heaviest in its class.

What it definitely has in its favour though is the price – the CFMoto 400NK is priced at just $5,490 ride away. An ABS version that also adds braided brake lines to the bike is available for an extra $500 at $5,990 ride away. 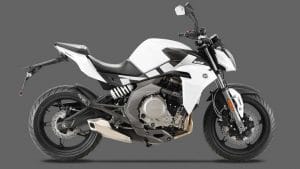 Big brother – the 650NK – sells for $6,990 ride away and now comes with KYB suspension front and rear and Continental ABS brakes as standard equipment.

In Australia, CFMoto also has its 150NK and 650TK models available.