“At the beginning of 2015, I firmly decided to pursue my dream to race international rallies with the clear target to race the Dakar one day – and to be the first Czech woman ever to do so.”

And to achieve that she has placed everything on the line – including her home.

She did not hesitate to get into debt, adding to the mortgage on her home to raise the necessary funds to compete in the 2018 Dakar.

Gabriela says she does not regret the decision.

“It cost me the money. But it’s true that it’s not ideal, I’m a little worried about it, and I’m gonna pay it for another ten years, apparently.”

“But if a woman did not go for her dream, it would be wrong.”

A late start in motorbikes

Gabriela’s start in motorcycling didn’t happen until she was 21.

“Although my father had a bike, there wasn’t much of a bike background in the family and I was able to buy my first bike quite late. It was a Ducati Monster 696.“

She believed she had found her passion and would stick with that bike forever, but she was tempted to try riding off road.

“One day I came across one very old but very cheap KTM. So I decided to buy it and try it. I assumed that even if it would have stopped working soon, it was a good deal for the experience.”

But for Gabriela it was love at first sight with her first big enduro bike, and it was the Ducati that was sold.

The Road to Dakar

“I believe once you try the off road, you never return on the road. I started travelling in Romania or Morocco riding off road and started to get to know the community of people around it.”

Then came her first experience with a road book.

“I put all my money and energy in it. Sometimes it was hard, but I am very stubborn. Maybe a bit too much – one week before my first international rally, I crashed badly on my shin bone”.

That injury sidelined her for 8 months, but when Gabriela recovered she then took part in her first international event – the Serres Rally in 2016 – and finished 49th overall. 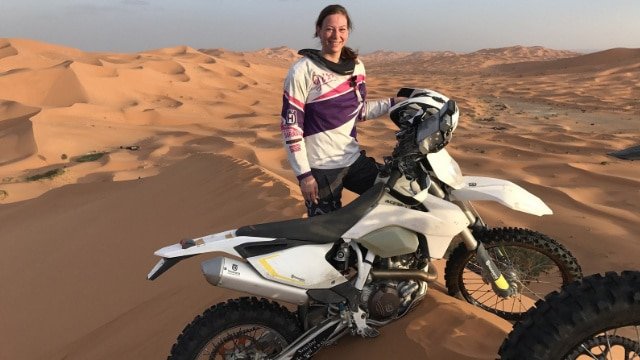 In preparation for the 2018 Dakar, Gabriela took on some other demanding rallies in 2017.

She tackled the Merzouga Rally (42nd overall), the Serres Rally (this time finishing 34th overall) and the Hellas Rally Raid, where she came 45th overall.

And just like Rosa Romero Font, Gabriela also has to juggle her professional career with her riding and racing – she works as a conference interpreter and lecturer of English and French.

“Dakar was a living dream for me. I always liked the combination of navigation and riding. It’s probably my soul adventurer”, Novotna said.

“Three years after starting to pursue my dream, it is about to come true, life is pretty amazing.”

“It is true that if you really want something, all the universe conspires in helping you to achieve it.”

Her keys to success? Determination and mental strength. 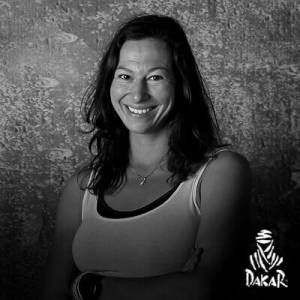 Suzie decided that after profiling the three Aussie blokes – Toby Price, Rodney Faggotter and Scott Britnell – I had to write something about the 3 women competing in the motorcycle division as well.