Five solar powered satellite phones have been installed along the Oxley Highway in NSW to improve emergency response times and potentially save lives.

State Member for the NSW seat of Oxley, Melinda Pavey, announced on the 15th November 2016 that the emergency solar powered satellite phones would be installed.

The phones have now been installed at various locations and complement a $10 million improvement program along the highway.

The program was jointly funded by the Centre for Road Safety and Roads and Maritime Services after a Safety Route Review. 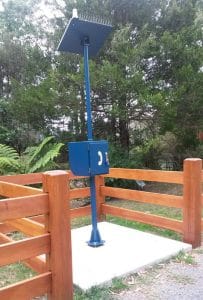 “Fast communication with emergency services can sometimes be the difference between life and death,” Mrs Pavey had said at the announcement.

“The Motorcycle Council of NSW had completed a mobile phone reception survey which identified a number of blackspots for mobile phone coverage.”

The Oxley highway is one of the most utilised recreational motorcycle routes and unfortunately has the most number of crashes recorded.

The phones use a satellite connection and solar power energy due to the remoteness of the sites.

In the three year period 2010 – 2012, there were 16 motorcycle crashes resulting in 14 motorcyclists being injured on this road.

“With the five sites now operational, calls on the emergency phones are free and are being monitored 24 hours a day by the NRMA call centre.”

“Calls are assessed and, depending on the type of emergency, will be directed to the appropriate emergency service and other services should they be required.”

The five phone locations are: