At the recent launch in Portugal, the new bike was praised by the world’s motorcycling media. 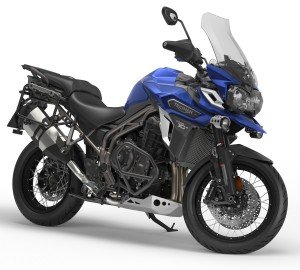 “An incredibly accomplished motorcycle that can hustle on or off-road”, and “the new machine is easier to ride for longer, as well as being safer, faster over distance and above all, more fun” were typical comments on the 2016 model.

They’re big claims for a bike that has already built a strong reputation in the adventure touring market for both its engine performance and handling on open highways and dirt.

Triumph became a major player in that market when it introduced the very successful Tiger 800 range in 2011.

It set a new standard with a highly efficient three-cylinder engine with 16,000km service intervals and fuel consumption figures of 5.0l/100km.

It was also fitted with very desirable shaft drive and had cruise control as standard equipment.

Triumph has taken the 2016 model to a new level by adding a significant amount of rider assist technology.

This has all been made possible by adding a ride-by-wire throttle system to the engine.

There is even an XCx model with an ultra low saddle of just 785mm to cater for those that find the standard model too high!