Today’s event has been stopped during the second special stage due to a serious crash.

Australian rider Andrew Houlihan says the crash occurred in the mountains late in the second stage, and 40 riders sat stationary for 2 hours while rescuers dealt with the incident.

Due to the suspension of racing, results from the day are yet to be finalised. Rally organisers will select a GPS point somewhere before the crash and complete the stage at that point.

For Andrew, day 5 started a little easier – his more realistic time from day 4 meant he left the start line just 17 minutes after the leaders.

“I made a big mistake and followed another rider and we were lost for 10 minutes. There are just endless mountains everywhere in Greece and we are riding a different one each day.”

“In the afternoon we descended down goat tracks littered with loose rocks and then made our way through some pine forests for a few hours.”

“Although I lost quite a bit of time getting lost I still enjoyed the day and had time on our liaison back to the bivouac to stop and have something to eat and drink in a small village with some of the other riders. I have no idea what was said as there were 5 different languages being spoken, but we were all laughing.”

“New tyres on the bike (again) for tomorrow which we are told will be the longest day of the race with 3 special stages, and we will also have another very deep river crossing to deal with.”

Andrew – do new tyres mean another pair of shoes for Katie??? 🙂

Competing in a rally like the Hellas is a tough gig!

It requires skill, guts, determination and both physical and mental strength and stamina. 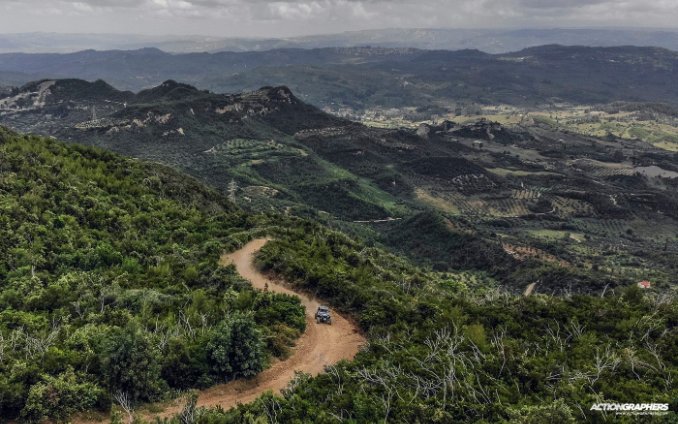 If we take off the time Andrew spent assisting Italian rider Lorenzo Cirri when he crashed on day 3, Andrew is very well placed with under 3 hours time difference to the leader.

That’s a truly remarkable feat for a rookie competitor in his first international rally, and his first attempt at any event as tough as the Hellas Rally Raid.

Simply completing each day is a success in itself!

Andrew’s day starts at 5.30am when he gets out of bed to finalise preparations for the day. Then there’s 10 to 11 hours of racing that is physically demanding on the body, rattling and shaking every bone, every organ. It starts to hurt but you have to keep going.

The mental challenge of navigating and picking the fastest and safest way through the terrain while staying on course drains you even more.

Then after all that when you just want to rest there’s another 2 hours reading and marking up the roadbook for the next day. He gets something to eat about 10.30-11pm, and tries to be in bed by midnight. He says that’s the earliest he’s been to bed in days.

While Andrew has made it through every day so far – and without ANY form of time penalty for errors – many haven’t. Over 50 riders have dropped out of the event so far.