Honda is back as a serious player in the 1000cc sport bike market with the unveiling overnight of the new CBR1000RR Fireblade SP.

The new bike was unveiled at the INTERMOT show in Cologne, Germany, along with a limited-edition and higher spec SP2 intended for track use.

It’s 25 years since Honda released the original CBR900RR Fireblade, and Honda’s original objective was to create a machine with the optimal power to weight ratio and superior cornering, acceleration and braking capabilities.

With the new 2017 models, Honda has taken those principles even further by reducing the weight and concentrating mass, increasing the power output compared to the previous model, and by incorporating the very latest electronics.

Over a kilogram has been shaved off the weight of the frame and swingarm, and further weight reductions come from the redesigned wheels.

The fuel tank is now made from titanium, the first time this has been done on a mass-produced motorcycle. It saves 1.3kg and aids in centralising the mass of the bike.

The exhaust is also made from titanium, saving 2.8kg, and significant reductions in the weight of engine components and the battery complete the overall weight reduction.

Engine power has been increased by 8kW despite no changes being made to the bore and stroke or to the camshafts.

The new bike has a 14% better power-to-weight ratio compared to the outgoing model.

The engine is also the first inline four-cylinder engine from Honda to use Throttle by Wire (TBW) control, allowing the incorporation of sophisticated electronics inspired by technology from the RC213V-S. 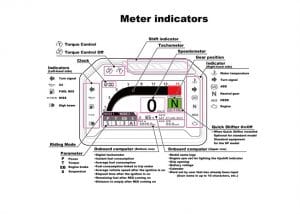 The electronics are built around a five-axis IMU (Inertial Measurement Unit) and begin with a 5 level Riding Mode Select System that controls power delivery.

The Fireblade also uses an enhanced version of the Honda Selectable Torque Control from the RC213V-S.

It brings wheelie control and traction control to the Fireblade with 9 levels of intervention but can also be switched off. And it goes without saying that the bike is fitted with 2 channel cornering ABS.

There is also a Selectable Engine Brake system to change engine-braking character to match rider preference and a range of conditions.

All settings can be set individually and stored for two different riders – USER 1 and USER 2. 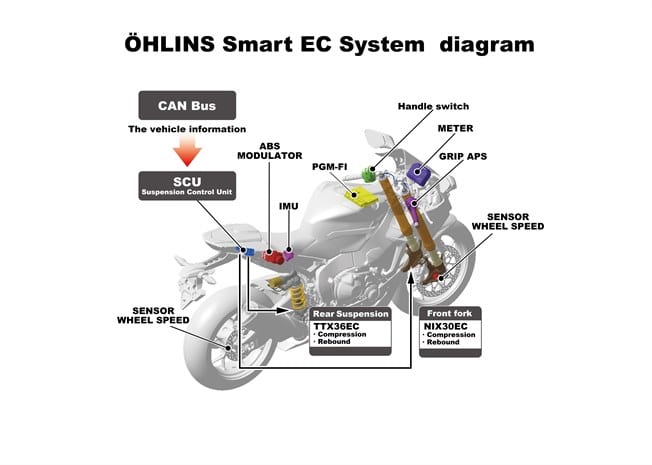 In another first for a Honda production motorcycle, the CBR1000RR SP is fitted with semi-active Ohlins Electronic Control suspension.

The standard CBR1000RR and the SP2

At this stage the standard version of the CBR1000RR hasn’t been shown, but we can expect it to break cover in November.

The SP2 is a homologated version of the SP and is likely to be produced as a limited production run of 500 units globally over the next two years.

The CBR1000RR SP2 receives 1mm larger intake valves, 1.5mm larger exhaust valves, and a change in included valve angle to 10º on the intake side and 12º on the exhaust.

We’ve been waiting a long time for Honda to update the CBR1000RR, but the wait will be worth it.

The timing of this release to celebrate that 25th anniversary is no coincidence because these new models also break new ground and should launch Honda back to the forefront of the 1000cc sports bike race.