And now the announcement (insert fanfare) is here. With much anticipation, it’s a not a career switch to bikes but a special Lewis Hamilton edition of MV Agusta’s F4, aptly named the LH44 – because only 44 are to be made. This partnership follows the success of their first project on the Dragster RR LH. 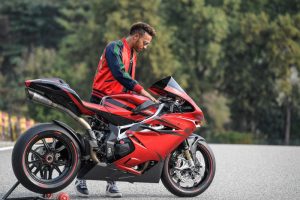 The customisation that led to the creation of the F4 LH44 was based on a continuous, direct, dialogue between the British Formula 1 champion and the CRC (Castiglioni Research Centre) workshop where every MV Agusta takes shape. With a long creative process,  attention was paid to the bike’s every last detail. Each individual idea was meticulously assessed and checked in terms of its feasibility, flair, and functionality.

The limited-edition gets customised special features including a Öhlins shock and upside-down fork in black, instead of the usual gold colour.

The standard F4 under-seat separate silencers are replaced with a titanium four-into-one system, and the power has been increased by a claimed 7hp to 212hp thanks to the new control unit.

The suspension setup that boasts premium suspension components: a Öhlins USD NIX 30 TiN-coated fork – which offers the separately adjustable hydraulic response in compression (left tube) and rebound (right tube), plus pre-load – and a Öhlins TTX 36 rear shock with piggyback reservoir, which, again, can be mechanically adjusted. Striking black anodized fork outer tubes are the result of a specific agreement with Öhlins. Let’s not forget that this Swedish company has made gold outer tubes one of its hallmarks. The rear spring and shock reservoir are also black, enhancing the sense of exclusivity.

Colour continues to play a starring role on the engine. All-black, along with carbon fibre components makes for a lightweight bike that boasts outstanding visual gusto thanks to an alternating gloss-matt paint pattern, just one of the many unique features on the F4 LH44.

Dedicated components include a racing-style fuel cap, forged wheels and unique items such as the rear wheel nut which, on the F4 LH44, has been CNC machined after anodization. 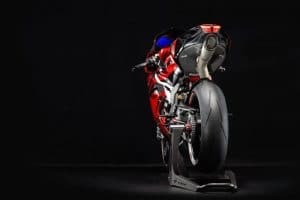 Hamilton said: “I am very excited to continue my partnership with MV Agusta. I love working with Giovanni and the guys at MV Agusta, their passion for engineering and attention to detail produces stunning, original looking bikes”.

“My projects with MV Agusta are a great way to combine my love of riding bikes with my interest in creative design process so I am very much involved with the CRC design team throughout.

“I am particularly excited to introduce my new bike, the F4 LH44. It looks quite stunning and I had the pleasure of riding on track a few weeks ago in Italy, it feels great and combines the best of both worlds, a race bike for the road! There will be 44 bikes produced so I hope the lucky owners will love it as much as I do.” Hamilton boasted.