The 2017 MotoGP season has claimed another training victim.

This time, Jack Miller is the victim of misfortune, the Australian breaking his right leg while out trials riding in Andorra. 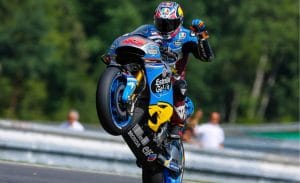 Team Estrella Galicia rider Jack Miller will be missing the upcoming Japanese GP after breaking his leg on Friday.

The Australian was training on a trials bike near his European base in Andorra fracturing the top of the right tibia when he put his foot down to save a slow speed front-end crash.

The Queenslander was immediately taken to the Hospital Universitari Dexeus in Barcelona, where he underwent surgery on Saturday morning. A plate and eight screws were inserted to stabilize the leg fracture.

Already with some mobility in the injured leg promising a speedy recovery, Miller will head back to Andorra today to start an intense physiotherapy program. However, he will not be fit in time for the Japanese Grand Prix at Motegi on 15th October. Miller has chosen to focus instead on his home Grand Prix at Phillip Island a week later and is concentrating his efforts on recovering for the race.

“Obviously I’m both disappointed and frustrated to have to sit out the Japanese Grand Prix through an injury sustained while training, especially as it wasn’t even a crash! We were out trials riding and I put a foot down when I lost traction from the front tyre. Nine times out of ten that would have been the end of the story, especially at such a low speed, but this time I must have caught my foot on something and ended up fracturing my right tibia close to the knee. The injury has been stabilized with a plate and screws and I already have some movement, but it’s clear that I won’t be fit for Motegi. However, I am determined to be back on the bike at Phillip Island and that’s what I’ll be working towards now with the physiotherapist.” Miller stated.

Michael Bartholemy, Team Principal: “Jack was extremely unfortunate to end up with a fractured tibia from such a seemingly innocuous incident; it was just bad luck. The timing is also unfortunate, as we’re about to head overseas for three races in as many weekends, but Jack is adamant that he will miss only next weekend’s Japanese Grand Prix at Motegi. His aim is to be back on the bike for his home race at Phillip Island and the prognosis is good. He will work now with a physiotherapist to increase mobility in the injury and, together with his doctors, we will make a decision on whether he is fit to ride in Phillip Island immediately after the Japanese Grand Prix.”

The Marc VDS Racing team is unlikely to field a replacement at Motegi, with the prospect of Miller making a return at Phillip Island.