The latest feature film added include Somewhere Else Tomorrow by Daniel Rintz.

The story of Daniel Rintz captured in Somewhere Else Tomorrow is the story any world travellers wish for, to be able to travel the world ‘NOW’ without the burden of waiting until enough money is the bank account, and having to come back when it is empty.

Daniel did not care about this, travelling across 27 countries he lived his dreams, and believed he could make a living along the way. And he did.

From remote deserts to terrorists territory to being down to his last few dollars, Daniel shows that despite all this it is possible to see the good the world has to offer.

“I have travelled the world for so many years, and I am yet to meet a bad person,” he says.

“I met Daniel Rintz at the Lisbon Motorcycle Film Fest last June, both our films (Somewhere Else Tomorrow and Dream Racer) were shown at the historical 840-seats Cinema Sao Jorge in the heart of the city,” says Christophe Barriere-Varju from the Award Winning Dakar Rally Film, Dream Racer, and founder of Dream Racer TV.

“I was really touched by his film, his life outlook, his own values, the determination and self-belief he had within himself to do what he did. Just imagine leaving without a dime and travel across 27 countries for almost 3 years. Not many of us will take that chance.”

“Daniel did and not only survived but this made him the sort of person the world really needs. Somewhere Else Tomorrow is the real deal and I am absolutely thrilled to have his film on Dream Racer TV. We look forward to promoting and making Daniel’s film available to a worldwide audience.”

About Somewhere Else Tomorrow 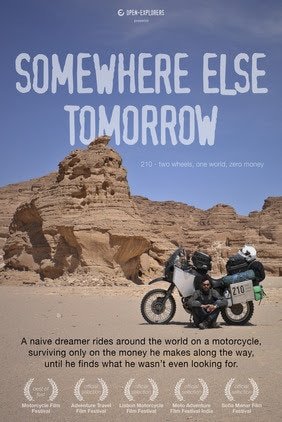 A naive dreamer, fearing stagnation and worried about getting tangled up in a boring job out of university, attempts the greatest challenge he can think of: travelling around the world on a motorcycle – without money.

Instead of wasting precious time saving up for the trip, he hastily decides to make money along the way picking up random jobs – an idea that makes his journey much more challenging and dangerous than he intended.

There was no support team, no film-crew, and no budget to buy his way out of tight situations. Out of the hardship he encounters trying to survive comes a story of true freedom and global understanding.