Suzuki Motorcycles Australia will once again be the official motorcycle partner of the 2017 Santos Tour Down Under event.

Suzuki will supply a fleet of twelve motorcycles consisting of the widely popular V-Strom 1000 and V-Strom 650 adventure tourers, the performance-packed GSX-S1000F, the all-new SV650 V-Twin and the ultimate in high performance motorcycles, the 1340cc Hayabusa.

The Santos Tour Down Under is a premier cycling event first staged in 1999, with local rider Stuart O’Grady (Tour De’ France competitor, multiple stage winner and holder of the Yellow jersey) taking the inaugural win.

The event has grown year after year to become the biggest cycling race in the southern hemisphere, and the first race outside of Europe to be given UCI World Tour status. 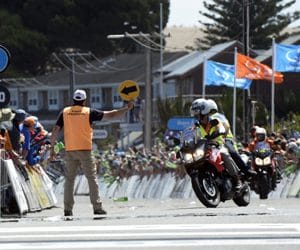 Held in Adelaide and the surrounding areas from January 14th to 22nd, the world’s top cyclists will be back once again to stamp their authority on the new season and try to take the trophy away from the Australians.

Travelling 879.1 km over six stages throughout metropolitan and regional South Australia, this is not a race to be taken lightly.

“The event is so much more than just a cycling race, being a sanctioned international event and an annual festival attracting over 795,000 spectators and is televised worldwide to the cycling community.”

“To partner with one of the country’s premier cycling events is a natural fit for our brand with the need for reliable and comfortable motorcycles playing an important role in the smooth execution of such a large scale event,” concluded Croft.

To follow the race watch SBS television for their nightly coverage and expert commentary team of Phil Liggett and Mike Tomalaris or visit the Tour’s website.

For information on the Suzuki Motorcycle range visit suzukimotorcycles.com.au