Motobot is being developed to ride unaided, and uses multiple sensors to detect its surroundings and the current conditions.

It can then make its own decisions about the use of the throttle and brakes, and also about gear changes.

The team has reached the stage where Motobot can ride on a race track, and the next stage is to make the outriggers retractable.

That will enable the R1 to lean more into corners and increase its overall speed. 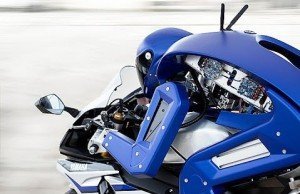 The team wants Motobot to be able to reach speeds of 200km/h in 2017, and ultimately to challenge Valentino Rossi’s times on a racetrack.

Yamaha’s team is based in Silicon Valley where it can draw on the technology from its partners SRI and Veniam.

SRI is an R&D company specialising in robotics and Veniam is developing technology for connected vehicles.