MV Agusta has produced a one-off special edition Brutale in a joint venture with Pirelli to acknowledge the close association the two Italian companies have had for many years.

The Diablo Brutale is based on the acclaimed 2016 Brutale 800.

Except for the unique colour scheme, the bike itself is in standard trim.

The matte black paintwork, red frame and highlights, and bronze exhaust pipes make this one of MV Agusta’s most stunning creations, and along with the recently released F3 Solar Beam shows the Italian manufacturer can produce some of the most beautiful looking machines we ever see.

Pirelli released the third generation of the Diablo Rosso tyres in late 2015, and the tyres are standard equipment on the Brutale 800. 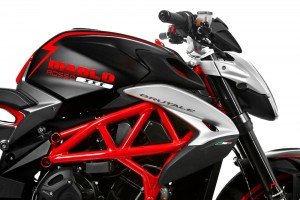 The Diablo Rosso III logo appears on the side of the fuel tank, and the Pirelli logo and the red ‘D’ of Diablo sit on top of the tank.

The “lightning” stripes that reflect the groove of the tyre’s tread pattern also appears on the tank, the front fender, and both sides of the tailpiece.

The tyres are finished with red highlights to show off the tyre’s branding.

There are no suggestions this bike will make it to production, not even in limited numbers.