Australian MotoGP rider Jack Miller has come under fire for his heated exchange with Spaniard Alvaro Bautista after the two crashed out of the Spanish Grand Prix.

Miller said he was confident of another top 10 finish after posting the fourth fastest time in the Sunday morning warm-up, and starting the race 10th on the grid.

But a hard charging Bautista ended Jack’s dream run six laps into the race, and Miller’s frustration boiled over.

“There was no way he was going to stop the bike. No way. He came in too hot, I was halfway into the corner and he hadn’t even turned yet, and he just cleaned me out,” Jack Miller said in a post race interview.

“He’s been riding in the world championship longer than I’ve been riding a road bike, so he should know better than that.” 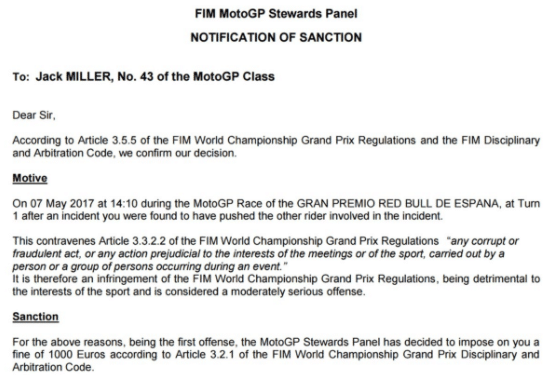 Jack says he knew it wasn’t the right thing to do, and that his frustration got the better of him because in the first five laps so many people had run him wide.

The DNF has dropped the Marc VDS Honda rider to 21st in the championship.

The race was won by Dani Pedrosa, Repsol Honda teammate Marc Marquez improved his position in the championship standings with a second place, and Jorge Lorenzo scored his first podium finish for Ducati with a third place finish.

Jack Miller will stay in Jerez for testing, then head to Valencia for a wet-weather test on Wednesday.

The next round of the championship is the HJC Helmets Grand Prix de France at Le Mans on the 21st May.