BMW Motorrad plans to introduce an emergency call system to its motorcycles from 2017, making the company the first to provide such a system as a factory option.

The system is similar to those we have seen in cars, and places an automated call to an emergency call centre in the case of a crash.

It is automatically triggered without any time delay in the case of a bad fall or collision, and immediately sends a message to a qualified BMW Call Centre.

In the case of a minor fall or collision, the emergency call is triggered after a time delay of 25 seconds, which allows the rider time to cancel the call before it is initiated. 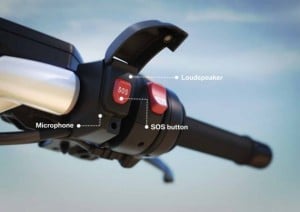 An emergency call can also be triggered manually with an SOS button on the handlebar.

Once an emergency call is triggered, the rider can be taken care of by the BMW Call Centre through an audio link until emergency services arrive. If there is no response from the rider on the audio link, help is sent regardless.

GPS co-ordinates of the incident location are sent to the call centre to direct emergency services to the rider.

It is a far more difficult process to implement on a motorcycle than in a car, but BMW’s system is smart enough to avoid false triggering.

It can recognise non-emergency situations such as if the bike falls over in a stationary position or in accidents at low speeds with no other traffic user involved.

The BMW Motorrad Advanced Safety Concept with integrated an eCall system was first shown on a K1600GT in 2011.

The European Commission in charge of the trial at the time, estimated that using an eCall system would save up to 2,500 lives every year with a savings €26 billion in the process.

The system is expected to be available as a factory option from the beginning of 2017 in Germany and will be rolled out to other European countries soon after.