The latest bike to be dumped from sale in Europe as a result of the upcoming Euro 4 emissions regulations is Honda’s CBR600RR.

Honda will no longer be able to sell the bike into Europe from the end of this year because it doesn’t meet the Euro 4 standards and Honda says making it compliant isn’t economically viable.

The work required would be expensive and sales numbers in the 600cc supersport category are not high enough to justify the necessary investment. 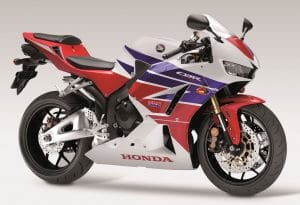 Sales in the category have plummeted in recent years.

The incentive to win on the race track has forced manufacturers to make the 600cc supersport class machines far more track focussed, but many road riders are finding the bikes are now too extreme for every day riding.

And because sales are in decline, manufacturers tend to allocate less resources into developing new models, which gives owners no reason to upgrade and slowing sales even further.

The funding model Honda uses for new model development would also have been a factor in the decision.

Honda asks each region to contribute financially to new model development. No doubt the European management would have been reluctant to pour money into making a bike compliant when the chances of good sales volumes were slim.

Similarly, countries like the US would be reluctant to help fund development that didn’t benefit their market.

There is no plan to replace the bike for the European market.

The current CBR650F is selling in reasonable numbers and will continue to be available, and while it isn’t as punchy as the CBR600RR it’s still a good option for those buyers looking for a mid capacity sports bike.

Honda will also bring a new CBR1000RR Fireblade to the market for 2017. That bike has been developed with Euro 4 in mind.

Like the Kawasaki W800 and Yamaha’s XT660Z Tenere and XJR1300 that have also been dropped in Europe, there’s no reason to drop the CBR600RR from the Australian market.

Honda Japan has already suggested the existing model can be sold into markets not governed by the Euro 4 legislation.

At this stage, Yamaha and Suzuki are suggesting they will still have a 600cc supersports model available for Europe, but Kawasaki is being a little more vague on the future of the ZX-6R.