Unveiled at the EICMA show in Milan last month, the KTM 790 Duke is certain to shake up the middle-weight category when it is released late next year.

The KTM 790 Duke is powered by the new 800cc LC8c parallel twin engine. 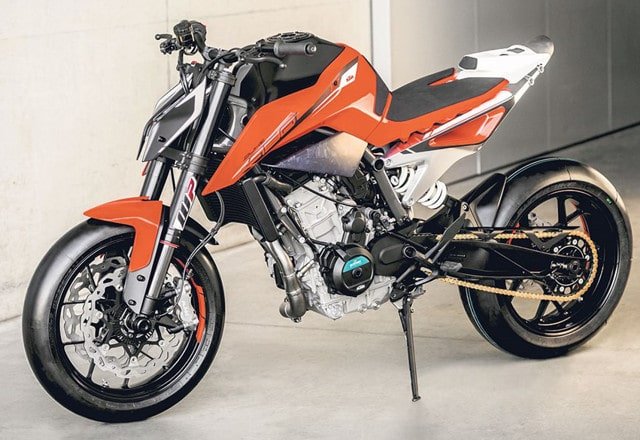 KTM has used the LC8 designation normally associated with the engine that powers the large capacity v-twin streetbike and adventure motorcycle range, but added the “c” to the engine name to signify “compact”.

Specifications of the bike are still to be confirmed, but we know it has fly-by-wire technology, variable fuel modes and multi-level traction control, and a host of electronic rider aids.

The frame is a steel tube construction and suspension is high-spec WP units both from and rear.

The 790 Duke will be the first in a range of new 800cc parallel twin powered machines from KTM and sister company Husqvarna that will surely challenge the likes of the Yamaha MT-07.

There’s also more good news for KTM fans with what is likely to be the second bike built on this platform – the 790 Duke Adventure – spotted undergoing road testing in Europe.

Spy shots have been circulating of the bike fitted with twin fuel tanks, solid fully-adjustable WP forks up front and monoshock at the rear, and DID Dirt Star rims – a 21” front wheel and 18” rear – that will give the bike some serious options in terms of off-road tyre choices.

And KTM have already said they are targeting Honda’s highly successful Africa Twin with the 790 Duke Adventure!