MV Agusta is planning to cut production levels, seek new investors and buy back the shares Mercedes-AMG owns in the company according to a report on the Italian news website Il Giorno.

The future of the partnership between MV Agusta and Mercedes-AMG was uncertain after reports of MV Agusta’s financial woes surfaced recently.

Mercedes-AMG has owned a 25% share in MV Augusta since 2014, but CEO Giovanni Castiglioni has said the relationship wasn’t as strategic as he had first thought, and now plans to buy back all shares Mercedes-AMG has in MV Agusta.

He didn’t say how he plans to raise the capital to fund the buy-back other than he is looking for new investors in MV Agusta, carrying out a plan to generate cash and to restructure the company’s 50 million Euro debt. 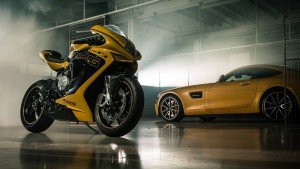 The timing of the announcement is awkward given MV Agusta has recently released the stunning looking limited edition F3 Solar Beam with a colour scheme based on the Mercedes-AMG GT.

The company is also planning to cut motorcycle production from 9,000 units a year to 6,000 units per year, and gradually increase it again to a stable level of between 7,000 and 8,000.

Castiglioni said the focus would be quality, “We want to go back to being the Ferrari of motorcycles.”

R&D funding that had been increased to allow MV Agusta to broaden its product range to its current 21 models will also be cut from €15 million to €7 million per year.

MV Agusta has experienced many highs and lows in its history, but this latest crisis has raised many doubts about its future viability and whether the company can attract an investor who can see the benefit of keeping the iconic Italian marque in production.