Matthias Walkner’s win in the 2018 Dakar makes him the first Austrian winner on a bike, and gives Austrian brand KTM its 17th consecutive success.

But like every year, the event was a mixture of triumphs and tragedies with some of the big names failing along the way.

Last year’s winner Sam Sunderland was badly injured in a crash in the dunes of San Juan de Marcona on only day 4 of the rally, ending his chances of defending his title. He had won 2 out of 3 stages at that point in the rally.

Honda’s Joan Barreda Bort injured his knee badly on the 7th stage, but limped through 3 more stages before retiring. Teammate Ricky Brabec watched his hopes of Dakar glory go up in flames when his bike caught fire on Stage 13.

And there was the navigation disaster on Stage 10 that ended the hopes of Antoine Meo, Toby Price and Kevin Benavides and basically handed the overall win to Walkner.

But for all the tragedies there were plenty of triumphs.

Toby Price: “Every time I’ve made it to the end I’ve been on the podium”

After sitting on the sidelines for most of 2017 after breaking his leg in last year’s event, many people didn’t even expect Toby to make it to the start line. Yet despite the injuries and “that” navigation error that cost him 50 minutes, Toby managed a third place.

“Three podiums is really amazing. After the year I had, it’s a dream come true, for sure.”

“Twelve weeks ago it was looking pretty grim. Six weeks ago I started training and riding. It’s a steep curve again. I seem to enjoy these steep curves to get back to where I need to be.”

Toby says this year’s event was definitely the hardest he’s been in.

“This is the fourth one I’ve started and this has been the toughest one of the lot. They’re definitely not making it any easier on us.”

“I’ve got the beach body now to head back home to Australia and lie on the beach for two weeks solid. But then we’ll get back to training, hook in and come back. Hopefully it will be bigger and better things next year.”

Rookie Scott Britnell put everything into his Dakar campaign himself, and was the only one of the 3 Aussies in the event competing without any factory backing or support crew. So even getting to the finish line – regardless of the final placing – is a monumental achievement.

Scott finished 61st overall. His persistence and determination is an inspiration.

Along the way he discovered just how hard and tiring the event is, but by the end of Stage 13 he had also discovered a new weight loss program.

“Two days ago I stepped on a set of scales to find that I had already lost 9kg. Most likely another couple since then.”

Competing in her 8th Dakar, Spanish rider Laia Sanz went into the event with the goal of finishing in the top 15.

She achieved it, coming in 12th overall.

Laia was the only one of the three females entered to complete the event, Rosa Romero Font and Gabriela Novotna both withdrew before the start of Stage 12.

It adds another success to her already long list of credits.

If we call Laia Sanz the Princess, Camelia Liparoti must be the Queen!

Out of 11 starters in the relatively new category, Camelia finished 5th with the Yamaha proving to be a competitive up against the Can Am and Polaris vehicles. 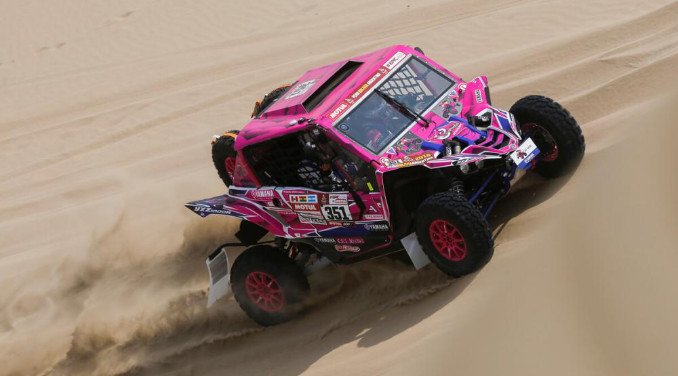 Want to know more about these riders and drivers? Check out our competitor profiles: